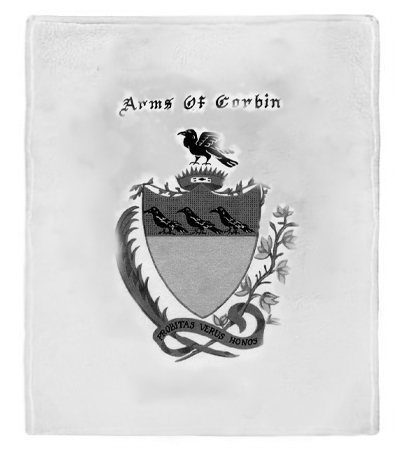 The story of the first Corbin’s arriving in the New World is interesting to say the least. Henry Corbin braved a commonly tempestuous trans-Atlantic journey, but the crew believed the storms were being brought on by a witch. Get rid of the witch, get rid of the storm was their belief. The captain disagreed, but had his most respected passengers check for the tell-tale witch marks on an elderly lady.  Henry then reinspected the lady, but the crew had already made their decision, she was to die. That’s the story Henry and other passengers gave upon their arrival.

Within a few years of that harrowing spectacle, Henry had established himself first in Maryland and then in Virginia. He, along with his brothers, ran a profitable trade network that elevated Henry into Virginia’s highest offices, and made him very wealthy in the process. The Corbin name solidified itself during subsequent generations, notably under Richard Corbin, who held the highest offices a Virginia born colonist could hold. He composed himself very well, earning praise and respect from his peers. But not all was well with the Corbins.

To this point in our First Families Series, each name has deep connections supporting Virginia and then the United States during and after the American War for Independence. Not so with the Corbins. They featured prominently in the Royal government, and looked set to continue in those lofty offices. But though they continued supporting the Crown, they also continued loving Virginia, and because of that love, the Corbins remained, and even championed their new country after her founding.

The Corbins chose to remain with Virginia when the Civil War erupted, and as so many others, suffered loss during the conflict. One such loss touched close to Stonewall Jackson, just before his sudden death in 1863. With such loss in focus, many of the Corbins chose to leave Virginia after 1865, and thus, this prominent family spread throughout the westwardly expanding country.

All photography used on this site is owned and copyrighted by the author unless otherwise noted. The Featured Image is of the Corbin Family Crest. Henry Corbin Portraitis from Wikimedia Commons. Peckatone Ruins is from Bryan Dameron’s Family History. Moss Neck Manor is from http://www.fredericksburg.com. “Janie Corbin and Old Jack” is from artist Mort Kunstler.